The Byzantine Empire:
a continuation of the Roman Empire 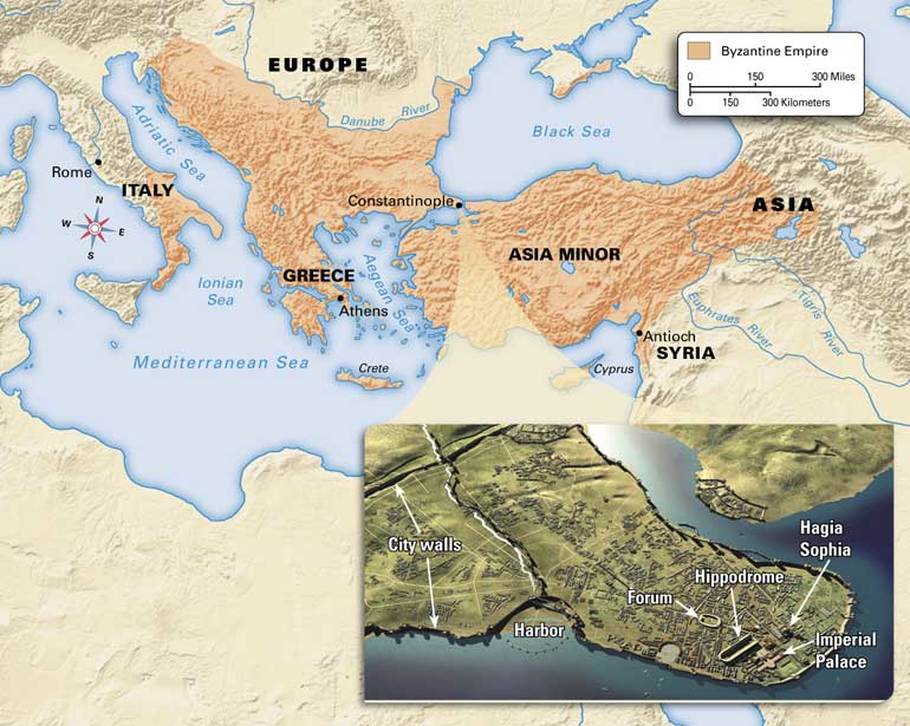 Constantinople was built on the site of an ancient Greek trading city called Byzantium. It lay near both the Black Sea and the Mediterranean Sea. This location between the two seas protected the city from attack and let the city control trade between Europe and Asia. Constantinople was in an ideal place to grow in wealth and power.

One reason eastern and western Roman society was different was the Byzantines' interaction with other groups. This interaction was largely a result of trade. Because Constantinople's location was ideal for trading between Europe and Asia, it became the greatest trading city in Europe. Merchants from all around Europe, Asia, and Africa traveled to Constantinople to trade. Over time Byzantine society began to reflect these outside influences as well as its Roman and Greek roots.

After Rome fell in 476, the emperors of the eastern Roman Empire dreamed of taking it back and reuniting the old Roman Empire. For Justinian, an emperor who ruled from 527 to 565, reuniting the empire was a passion. He couldn't live with a Roman Empire that didn't include the city of Rome, so he sent his army to retake Italy. In the end this army conquered not only Italy but also much land around the Mediterranean.

Justinian's other passions were the law and the church. He ordered officials to examine all of Rome's laws and remove any out-of-date or unchristian laws. He then organized all the laws into a legal system called Justinian's Code. By simplifying Roman law, this code helped guarantee fair treatment for all.

Built by Justinian in the 530s to show his strong ties to the church, its huge domes rose high above Constantinople.  According to legend, when Justinian saw the church he exclaimed in delight
"Glory to God who has judged me worthy of accomplishing such as work as this! O Solomon I have outdone you!"

Just as it was in the west, Christianity was central to the Byzantines' lives.  From the beginning, nearly everyone who lived in the Byzantine Empire was Christian. To show their devotion to God and the Christian Church, Byzantine artists created beautiful works of religious art.  As time passed, people in the east and west began to interpret and practice Christianity differently. For example, eastern priests could get married, while priests in the west could not. Religious services were performed in Greek in the east. In the west they were held in Latin.

For hundreds of years, church leaders from the east and west worked together peacefully despite their differences. However, the differences between their ideas continued to grow. In time the differences led to a split within the Christian Church. In the 1000s Christians in the east broke away from the rest of the church and formed what became known as the Eastern Orthodox Church. As a result, eastern and western Europe were completely divided.

The Fall of an Empire (East side)

After the death of Justinian in 565, the eastern empire began to decline. Faced with invasions by barbarians, Persians, and Muslims, later emperors lost all the land Justinian had gained. The eastern empire remained a major power for several hundred years, but it never regained its former strength.  The eastern empire's struggles finally ended nearly 700 years after the death of Justinian. In 1453 a group called the Ottoman Turks captured Constantinople. With this defeat the 1,000-year history of the eastern Roman Empire came to an end.
Fall of Constantinople 1453 - Video/info