Africa is a big place. In fact, it is the second-largest continent on earth. Only Asia is bigger.  The plains of sub-Saharan Africa, or Africa south of the Sahara, are crossed by mighty rivers. Among the main rivers are the Congo, the Zambezi, and the Niger. Along the Niger River in West Africa great civilizations arose. The role this river played in the development of civilizations is one example of the way the physical geography of West Africa affected history there.  Look closely at the map below and find the Niger River. As a source of water, food, and transportation, the river allowed many people to live in the area. 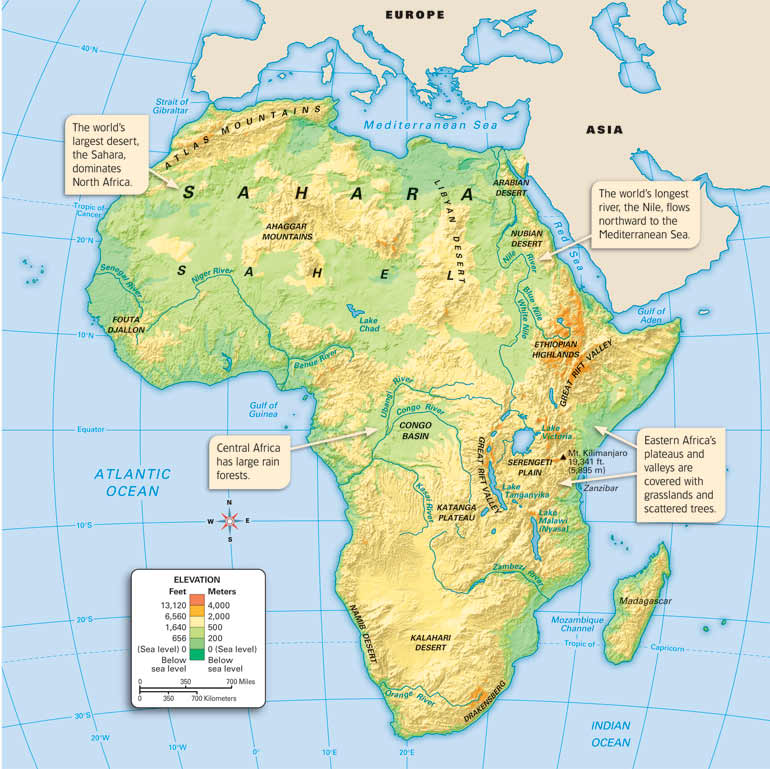 For a long time, West Africans had ventured into the desert for trade. However, those early travelers could only make short trips from oasis to oasis. Their horses couldn’t go far without water. In the AD 200s, the situation changed. At about that time, Romans started to use camels to carry goods throughout northern Africa. These long-legged animals could store water and energy in their bodies for long periods of time. They could also carry heavy loads. With camels people could cross the Sahara in two months. Traders formed caravans to make the trip. A North African people called the Berbers used their knowledge of the desert to lead the caravans. Even with camels and the Berbers’ skills, crossing the Sahara was dangerous. Supplies could run out, thieves could attack, and caravans could lose their way.

Despite these dangers, West Africa’s gold and salt mines became a source of great wealth. Camels carried salt from the mines of the Sahara to the south to trade for gold. Traders then took the gold north, to Europe and the Islamic world. Along with gold and salt, traders carried cloth, copper, silver, and other items.

In ancient Africa, early civilizations had to develop ways to meet their needs. Because of the geographical features and the vast or large differences in climates, the entire African trade was based on supply and demand. The Sahara or desert region had once been an ocean bottom millions of years ago and therefore had rich deposits of salt. Quantities were so great in places that entire dwellings were made of blocks of salt. However, there was a scarcity (lack) of gold needed for trading with the camel caravans coming from the Middle East and other European traders. In the forested regions of the west, salt was highly valued and prized for flavoring food and was critical for sustaining life in a hot, tropical environment. This area did, however, have rich deposits (large amount) of gold. As trade flourished between all civilizations around the Sahara, Arabia, Europe, and Asia Minor the demand for gold INCREASED.   Kingdoms in Africa needed to silent barter to achieve their society’s NEEDS despite their WANT for gold. 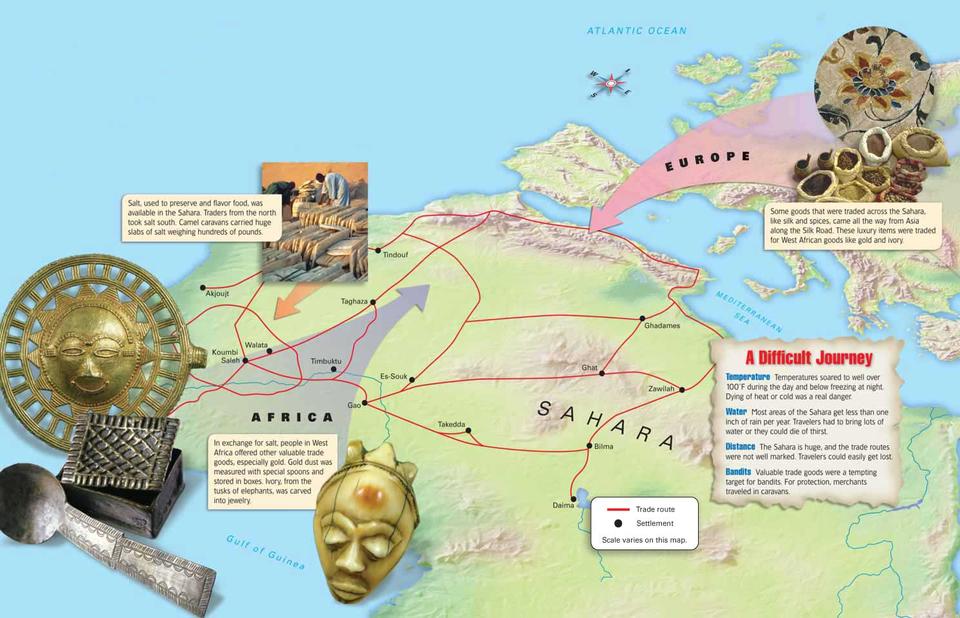 West Africa’s land is one of the region’s resources. With its many climates, the land could produce many different crops. Among the traditional West African crops are dates raised in desert oases and kola nuts, used for medicines, from the forests’ trees. Along the Niger, farmers could use the water to grow many food crops.

Other resources were minerals. People who live mainly on plant foods, like many early Africans, must add salt to their diets. The Sahara was a source of this precious mineral. When ancient lakes there dried up, they left salt behind. Workers mined the salt by digging deep into the earth.  Gold was another mineral resource of West Africa. Although gold is soft and therefore useless for tools or weapons, it makes beautiful jewelry and coins. Gold came from the southern forests. Miners kept the exact locations of the gold mines a secret. To this day, no one knows exactly where the mines were located, but gold became a valuable trade good.

Sometime around 500 BC West Africans made a discovery that would change their region forever. They found that they could heat certain kinds of rock to get a hard metal. This metal was iron. By heating the iron again, they could shape it into useful things. Stronger than other metals, iron was good for making tools.   One iron tool, the hoe, allowed farmers to clear the land more quickly and easily than they could with earlier tools. As a result, they could grow more food.  Iron weapons also provided a better defense against invaders and helped in hunting. As better-equipped farmers, hunters, and warriors, the West African tribes gained power. They also became known for fine sculptures of animals and human heads they made from clay.  Iron tools also provided another benefit. They helped West Africans live in places where they couldn’t live before. Iron blades allowed people to cut down trees to clear land for farms. Because they had more places to live and more farms for growing food, the population of West Africa grew.

Download File
GHANA
Archaeology provides some clues to Ghana’s early history, but we do not know much about its earliest days. Historians think the first people in Ghana were farmers. Sometime after 300 these farmers, the Soninke (soh-NING-kee), were threatened by nomadic herders. The herders wanted to take the farmers’ water and pastures. For protection, groups of Soninke families began to band together. This banding together was the beginning of Ghana.

Once they banded together, the people of Ghana grew in strength. They learned how to work with iron and used iron tools to farm the land along the Niger River. They also herded cattle for meat and milk. Because these farmers and herders could produce plenty of food, the population of Ghana increased. Towns and villages grew.  Besides farm tools, iron was also useful for making weapons. Other armies in the area had weapons made of bone, wood, and stone. These were no match for the iron spear points and blades used by Ghana’s army.

Ghana lay between the vast Sahara Desert and deep forests. In this location, they were in a good position to trade in the region’s most valuable resources—gold and salt. Gold came from the south, from mines near the Gulf of Guinea and along the Niger. Salt came from the Sahara in the north. People wanted gold for its beauty. But they needed salt in their diets to survive. Salt, which could be used to preserve food, also made bland food tasty. These qualities made salt very valuable. In fact, Africans sometimes cut up slabs of salt and used the pieces as money
a brief overview
MALI
Like Ghana, Mali (MAH-lee) lay along the upper Niger River. This area’s fertile soil helped Mali grow. In addition, Mali’s location on the Niger allowed its people to control trade on the river. Through this control of trade, the empire became rich and powerful. According to legend, Mali’s rise to power began under a ruler named Sundiata (soohn-JAHT-ah).

Mali’s most famous ruler was a Muslim king named Mansa Musa (MAHN-sah moo-SAH). Under his skillful leadership, Mali reached the height of its wealth, power, and fame in the 1300s. Because of Mansa Musa’s influence, Islam spread through a large part of West Africa. Mansa Musa ruled Mali for about 25 years. During that time, his army captured many important trade cities, including Timbuktu (tim-buhk-TOO), Gao (GOW), and Djenné (je-NAY). These cities became part of Mali’s empire.

Religion was very important to Mansa Musa. In 1324, he left Mali on a pilgrimage to Mecca. Making such a journey, or hajj, is a spiritual duty of all Muslims. Mansa Musa’s first stop on his hajj was Cairo, Egypt. According to one account, he arrived in the city with nearly 100 camels, each loaded with 300 pounds of gold. Some 60,000 men traveled with him. Because of Mansa Musa's journey, many countries learned of the wealth in Africa beyond the Saraha Desert and set out to trade with the great West African kingdom.
IBN Buttuta
SONGHAI  (Also spelled Songhay)
Even as the empire of Mali was reaching its height, a rival power was growing in the area. That rival was the Songhai (SAHNG-hy) kingdom. From their capital at Gao, the Songhai participated in the same trade that had made Ghana and Mali so rich.   Songhai did not remain part of Mali’s empire for long. As Mali’s government grew weaker, the people of Songhai rose up against it and regained their freedom. Even before they were conquered by Mali, the leaders of the Songhai had become Muslims. As such, they shared a common religion with many of the Berbers who crossed the Sahara to trade in West Africa. Because of this shared religion, the Berbers were willing to trade with the Songhai, who began to grow richer.


As the Songhai grew richer from trans-Saharan trade, they expanded their territory. Gradually, they built an empire. Songhai’s growth was largely the work of one man, Sunni Ali (SOOH-nee ah-LEE), who became the ruler of Songhai in 1464. Before Ali took over, the Songhai state had been disorganized and poorly run. As ruler, he worked constantly to unify, strengthen, and enlarge it. Much of the land that Sunni Ali added to his empire had been part of Mali. For example, he conquered the wealthy trade cities of Timbuktu and Djenné.
A brief overview